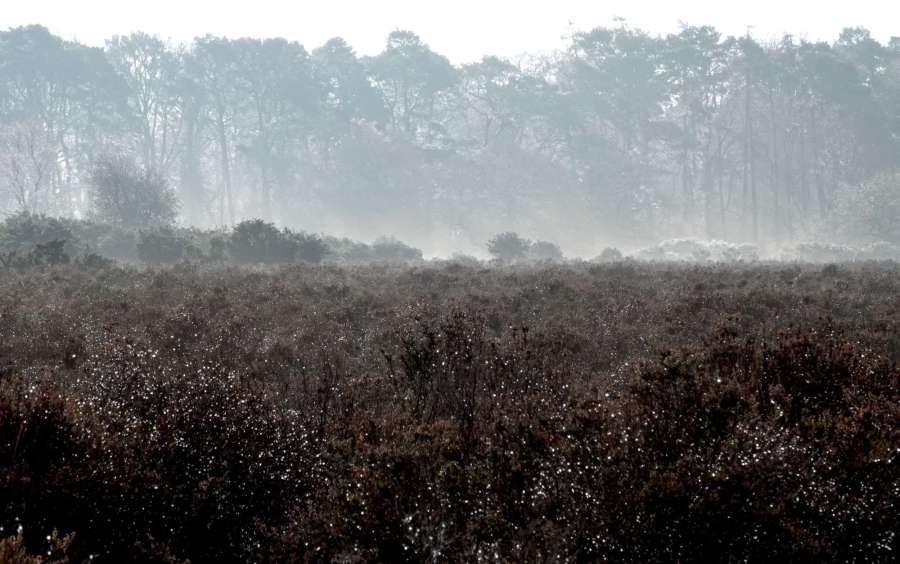 The trees of Island Thorns are tall and thin, but they grow so closely that the wood looks somehow full of mist and the sun slants through the trunks in narrow streaks.

Here, I continue my very first walk with Joan Begbie and her dogs, Bill (her white bull terrier) and Mr Bundy (a diminutive griffon). Joan was walking in mid-February in the early 1930s, and I was following her in 2020, in the first week of December. For both of us, the weather was bright and frosty, with “the moist land twinkling all over”. (If you happen to have a copy of Joan’s book Walking in the New Forest sitting on your bookshelf and want to follow us, this is the walk described in pages 50 to 58, one of several Joan made using Fritham as her starting point.)

At the end of the previous post, you left us turning the northern corner of Studley Wood. At this point (Picket Corner) and along the first part of the track, the views are wonderful. Joan notes the “Dorset hills ahead of us, looking very splendid across the pine-sown heath…”.

We had earlier spotted the pretty thatched white cottage in the distance that sits some way to the north of us, a little way in from the junction of the Fordingbridge and Downton roads. However, now we have an even better view. Joan calls it Hope Cottage, but that is in fact another dwelling closer to the road junction. It’s an easy mistake to make, as Hope Cottage is recorded on the 1930s (and my modern) map: why wouldn’t Joan assume that the most conspicuous cottage when seen from afar is what the map records. What we are looking at is, however, Boundary Cottage (called Bound Cottage on an OS map from the 1900s: it seems to have been lost from subsequent OS maps), so named, I assume, because it lies on the northern boundary of the New Forest’s accessible land.

Having finished admiring the view, we head away from Picket Corner, following the track southwards and listening to a stonechat’s scratchy call. The tall trees of Islands Thorns (which Joan spells Island Thorns) now lie to the east of us.  Islands Thorns is a forestry inclosure: a commercial plantation originally fenced so that the commoner-owned ponies cannot access it and damage new sapling growth. Some inclosures – including Islands Thorns – are no longer, or only partly, fenced in this way, because the trees are tall and mature enough that the ponies no longer pose a danger to their growth. Woods like Eyeworth and Studley, in contrast, are ancient woodland remnants, sometimes called pasture woodland because the ponies are able to roam within them.

I checked an even older map (Drivers’ map, second edition, 1814), which predates the planting of Islands Thorns in 1852. Here, Studley Wood is larger, occupying all the land between the twin upper ‘prongs’ of Latchmoor Brook. Much of this was cleared for the 1852 plantation, leaving just the eastern remnant we passed through earlier. As I look towards what is now the northwestern edge of Island Thorns Inclosure, the frost is misting and layering above the moisture-sparkled heath, and I smell the crispness of cold heather and bracken. I wonder if the land remembers ancient Studley, if older memories thread through the undergrowth, and if breezes from earlier times still linger there, hushed among these younger trees.

But we must walk on.

Suddenly, the red arrow on the map on my phone app disappears into a scrub of small trees and gorse to my left. This is Bur Bushes, and I faithfully follow the red arrow. Later, I discover that a clearly laid out path, hidden from me by the small trees, does run parallel to my more scrambled meandering in pursuit of the red arrow. I imagine that Joan is all the time keeping to the main route, Bill and Mr. Bundy criss-crossing the track, sometimes running and panting ahead of me, sometimes returning to their mistress (Mr. Bundy, in particular, is more nervous of losing sight of Joan; Bill is more adventurous).

I don’t regret walking my way, though. Joan may be laughing at me for missing the path, but I’m treated to a flock of redwings swooping from tree to tree. Every time I approach, off they flit, chuntering their alarm calls, before settling ahead and becoming both silent and invisible. Then I walk closer, and off they go again. I feel bad for disturbing them, but I am only walking the way I want to go, and not deliberately following in their wake. They get a reprieve, though, when the air is filled with a glorious scent and I am distracted for several minutes. I smell them from metres away before I see them: crab apples, small and yellow, speckling the ground beneath an apple tree and fermenting away in this quiet corner, even in the cold air. Crab apple trees live for up to 100 years. Joan therefore does not see my particular tree (which at the most would have been a seed or tiny shoot) and, in any case, she’s still walking on the proper path, leaving me to the pony ways among Bur Bushes.

The path to Islands Thorns

Eventually, Joan and I meet again, just as the track splits into a little tangle of ways, among which one leads east and one leads south, both to Islands Thorns. It is difficult to work out from Joan’s description which way she chose to enter the inclosure. I settle on the eastward path but was “sorry I could not travel both.” It’s still icy cold and, away from the sheltering eaves of Studley and Eyeworth, the thaw is much less advanced. The track manages to be both muddy and slippery with ice. It is also somewhat rutted, and the watery mud has frozen over and is tricky to navigate. Joan makes no mention of this. I wonder if the way was less churned up for her. I assume this is a track now used by the Forestry Commission for vehicular access to the inclosure beyond, and it would possibly have been less used in the 1930s. As walkers in the New Forest, it’s important to remember that this is a working landscape, and you must take your chances with the state of tracks used for forestry and commoning business.

And now, here we are, at the edge of Islands Thorns. I admit, my expectations had been low. I’m not a fan of plantations, with their regimented rows. Looking around, I first saw that there was no modern fence or gate here other than a few remnant stakes with no job to do. However, the original earth enclosure bank and ditch persist, all covered in moss and grass, and with humps and knobbles of sphagnum and old tussocks beyond in the damp ground.  This was a good start. Like coppicing and pollarding, the signs of old human activity embedded in the earth are memories of the land’s bygone days, and a reminder that our footprints can be benign.

Then, I enter the wood and lift my eyes, and all those low expectations are gone. Joan admires the close-growing, tall trees, and the way the sunlight turns misty as it angles through them. I simply stare upwards, and upwards, and upwards…craning my neck to see into the tree crowns far above. Most of the trees here are oak. Planted closely together, all at the same time back in the mid nineteenth century, they are not the spreading oaks of pasture woodland or open country. They are thin and tall, very tall, with only their crowns stretching out as they gain the daylight above. A few evergreen conifers stand among them, especially at the wood’s edge, but it is the oaks that dominate and cast their spell over the land beneath. I understand from a Forestry Commission report that this is among the largest plantations of same-aged oaks in the New Forest, and possibly Hampshire. I like it. It’s not gobliny in the way of Anses, Eyeworth or Studley, but it possesses a stately charisma. The birds must like it, too, as the trees are full of their calls, even in the midst of December.

Joan doesn’t spend a lot of time describing her walk through Islands Thorns. She, Bill and Mr. Bundy follow the ride onwards until she hits a gravel track “stuck with telegraph poles”, and then turn left, crossing the headsprings of the Latchmoor Brook twice, before finally achieving the “main track from Amberwood and the Ridge” (which has to be what is now the cycle route along Hampton Ridge between Abbotswell and Fritham). This doesn’t give me much to go on. I go on an exploration, and find two tracks, parallel to each other, where waist-high telegraph poles are still stuck in by the side of the path. On one, the way that I decide more likely to be Joan’s route because it ends up on the Hampton Ridge track, they appear intermittently. On another path to the north of this there are similar poles spaced out more evenly, maybe 100 to 200 metres apart. Perhaps they are all that remains of an old fence, but I’m uncertain.

One thing’s for sure, there’s no sign of Joan’s gravel track within the inclosure. That gravel is probably several inches deep now. This is winter at its wettest underfoot, and there is an abundance of mud. Squelchy, clinging, sticky mud; the kind that makes it twice as hard to walk because of the need to extricate your boots from its grasp with each and every step. After five minutes, I give up tacking from side to side of the track trying to find the least muddy parts, because it is all muddy. My boots keep my feet dry, but they don’t stop the mud splashing up my trouser legs. I even manage to get some in my hair. Bill and Mr. Bundy would be proud.

I decide it doesn’t matter that I’m not sure I’m following exactly in Joan’s bootsteps. Islands Thorns is not a frequently tramped wood, not when compared to some of the more popular woods and inclosures around the New Forest. The folk you find here are the locals in the know or the more resolute visitors, those who enjoy exploring the offbeat places that fewer people find. People like Joan, in fact. In Islands Thorns, you could meet Joan marching towards you round any corner, Mr Bundy trotting at her side, Bill leaping ahead in search of whatever scent has grabbed his nose’s attention. You’d exchange a few cheerful words about the loveliness of the trees and the beauty of the day, and then you’d part, Joan striding away from you into the distance, down the rides and times of her beloved forest.

I find the Hampton Ridge path and make my way back to Fritham and the car, but the voices of Islands Thorns’ tall trees stay with me all day. Joan and I won’t be long away from the forest.