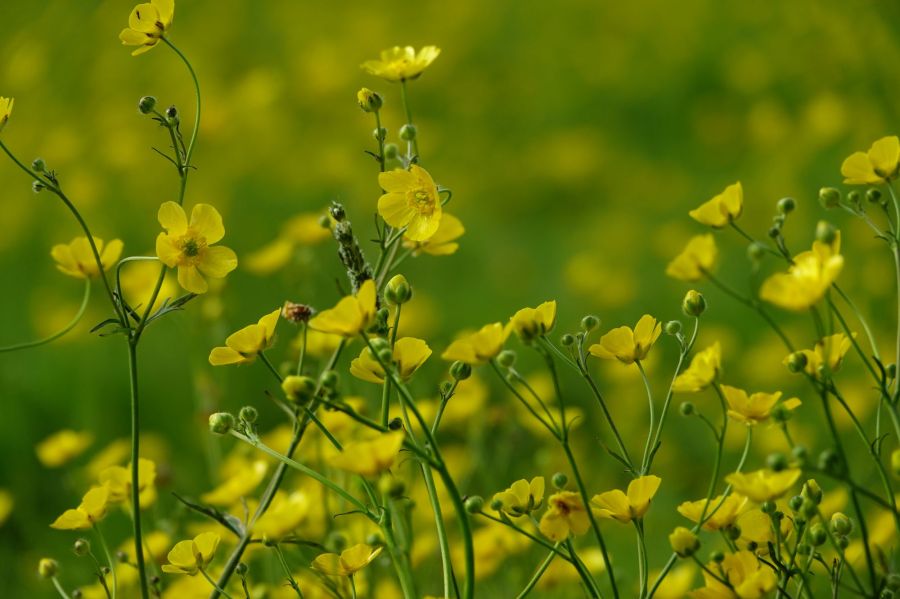 In which I walk among clouds of Cow Parsley and Meadow Buttercups, meet some young Long-tailed Tits, and hear a Sedge Warbler

Take the Ringwood highway and keep to it until a lane bears off to the right. At first it goes through hedges but soon exchanges them for the river bank and lovely views of water-meadows and elms and wooded hills. It goes straight as a die to Bickton, a village beloved by painters.

Regular readers of this blog will know that I am following walks, or parts of walks, described by Joan Begbie in Walking in the New Forest, which was published back in 1934. I’m interested to discover what has changed and what has not in the Forest, as I walk alongside Joan and her two characterful dogs, Bill, a white bull terrier who loves to charge out of sight across the heaths, and Mr. Bundy, “a rough-haired brindled griffon of diminutive size and choleric disposition”.

Joan includes a chapter of what she calls road walks.

To those who like road walking the Forest has as much to offer as it has to the lover of quiet woodland path and lonely moorland track. It is safe to say that there are no ugly or uninteresting roads in all this part of Hampshire and many that are really inspiring. Even the great tarmac highways become things of beauty as soon as they enter the Forest.

Back in the 1930s, of course, the ‘great tarmac roads’, and even the smaller ones, wouldn’t have been as busy as they are now. I’m not a big fan of road walking myself, and I’m not sure Joan would have been, though she was obviously catering for all preferences in her book of walks. In this chapter, though, she takes the opportunity to visit some of the Forest’s villages, and those just outside its boundary. One of these latter places is Bickton, which sits in a lovely setting on the banks of the Avon. That’s where we’re heading today.

If you have a copy of Walking in the New Forest, you can find Joan’s description of Bickton and its surroundings on pages 232 to 233.

The path from Fordingbridge to Bickton

I don’t take the Ringwood highway to Bickton, as Joan suggests in Walking in the New Forest. Instead, I persuade her and the dogs to meet me for a 7am start at St Mary’s Church (a lovely mediaeval building, and well worth a visit) in Fordingbridge, a place Joan knew and describes in her book.

From there, we head off down what is now part of the Avon Valley Path. For the last two days it has been raining, but today the sun is glistening on the still moist leaves and flowers, droplets of water sparkling like stars. Cow Parsley (or, as my Yorkshire mother used to call it, Dead Man’s Oatmeal) has been growing and growing, and now meets and waves across the path as if dancing a mediaeval farandole, so our clothes are soon sodden and blessed with tiny petals as we brush against the plants. The Hawthorn is in full blossom, and buttercups nod gently by the path in a wispy breeze. Shining flecks of tiny insects float in the air. It’s warm, already.

We get to the end of this footpath, and turn left, heading for the sluices and pools to the west of Bickton. There’s a familiar high-pitched tsee-tsee of Long-tailed Tits, a whole gang of them flitting in and out of a wayside tree. They’re fledglings, getting to grips with their wings. If they were human, they would be riding motor bikes and going to wild parties.

There are other delights. A single Wild Rose flower, waiting for its companions to open; Hemlock Water-dropwort, poisonous but beautiful, a plant of waterways and parasol flowerheads; a field of Meadow Buttercups and frothy Dandelion seedheads; Red Campion and Speckled Wood butterflies, and there, an Orange-tip, bright as poster paint, hurtling by.

Our way takes us over wooden footbridges, crossing the streams, sluices and damp earth of the water-meadows. Dragonflies – Beautiful Demoiselles, the males iridescent blue and the females coppery – pass swiftly by in their angled flights. A Grey Heron flies overhead, and then another, and then another, and then even more. I count seven. It’s a little like walking under an airport flight path, only soundless and serene.

As we reach the end of the path at the Avon, and find the minor road that travels through Bickton, a swan takes off from the water and we marvel at the powerful rushing beat of its wings. Not soundless, but still serene.

Here is a big water-mill with weirs, noisy race, and a big still pool where wild swan and mallard float and dabble peacefully with the prosaic quackers of the village.

The weirs and races remain, and the waters of the Avon are slow and peaceful. The water-mill is no longer operational, but its eighteenth and nineteenth century buildings still stand, now converted into apartments. (Later on the walk, I meet one of the residents, walking his friendly dog, who lives in one of the upper-floor flats. He tells me the views over the river and water-meadows are beautiful, making up for the lack of a lift.)

There are also Mallards, mostly in pairs, but I don’t see any “quackers” – presumably farmyard-type ducks. Joan recounts an amusing story, with an enchanting insight into village life in Bickton in past days.

An old lady who used to live in Bickton told me that nearly every cottage had its ducks and that in the evening it was an amusing pastime for the villagers to watch the birds leave the water in a body, proceed along the lane, and as the different cottages were reached break up into separate companies each bound for its own particular gate.

Now that I would have loved to have seen.

The cottages have thatched porches and pretty gardens, and at the far end of the village is a beautiful old farmhouse whose green lawns drop sharply down to the river.

I turn off on a footpath. Its beginning doesn’t look very promising from the road side of the stile – overgrown and under-used. But, as I step over and into the foliage, I find a trodden path.

The path then turns right, over two stiles, to cross another buttercup meadow, guarded by a horse that looks at me suspiciously, but obviously deciding I am alright. I am allowed to proceed.

After the buttercup field, I cross another stile next to a white gate, and then turn back towards the Avon and the footpath I arrived on. Apart from the beating wings of the flying bird earlier, I haven’t seen any swans. Now, there they are, preening and gliding on the river, graceful, as if they too are mesmerised by the peace of the day. I stop and watch them, while Joan stands by me, remembering the swans she has seen in all her life. She’s in her thirties now, as she writes her book. She has many more swans to see, many more paths to walk.

Our path takes us back on the same way we came out of Fordingbridge, across the water-meadows, along the footbridges, by the buttercup meadows. The Long-tailed Tits have taken their teenage tantrums elsewhere, but I hear a Sedge Warbler and see a Whitethroat.

Then, we’re back in the churchyard of St Mary’s. It’s late morning, the sun is high, and it’s time to turn home for rest and to remember a lovely, nature-filled walk.

6 thoughts on “Fordingbridge, Bickton and the Hampshire Avon: a walk of birdsong and buttercup-filled meadows”