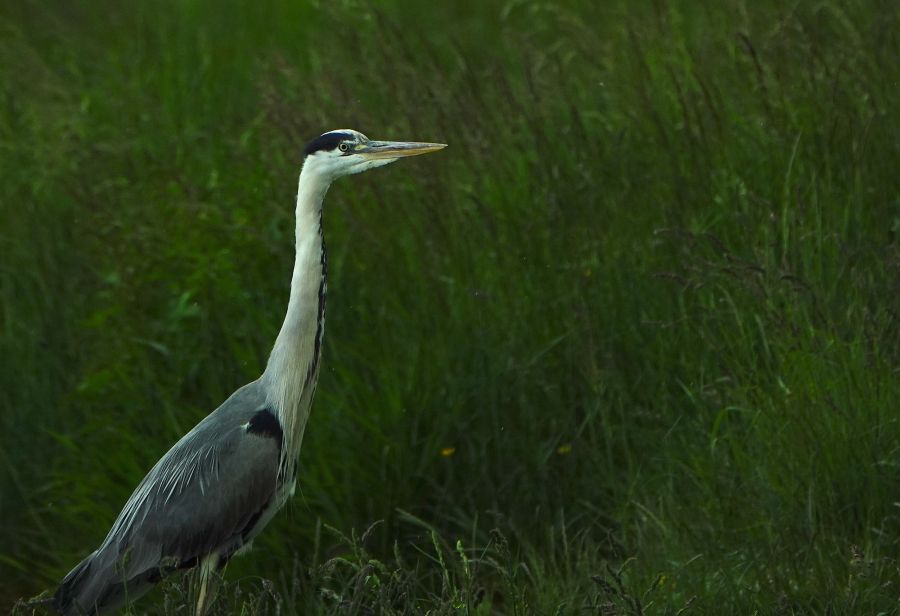 In which I wait with Grey Herons by the water

Once when walking here…a heron, up till then hidden from me by the bank of the stream, rose majestically and flew up its course without disturbing a twig of the overhanging bushes in spite of his mighty wingspread.

Regular readers of this blog will know that I am following in the bootsteps of Joan Begbie and her two dogs (Bill, a white bull terrier, and Mr Bundy, a diminutive griffon). Joan wrote about her walks in the New Forest in her 1934 book Walking in the New Forest, a delightful read, full of her entertaining observations, knowledge, and her own lovely little sketches. I’m writing in this blog about what she saw, and about what has changed and what remains the same in the almost a hundred years that separate our tramps through woods and across heaths.

This week, we’re going on roughly the same walk from Fordingbridge to Bickton as described in my last post. This time, however, we’re considering Grey Herons. I saw several of them the previous time, which should have made me realise there had to be a heronry nearby. I was, though, too wrapped up with buttercup fields, fledgling Long-tailed Tits and gliding Mute Swans. The existence of the heronry was pointed out to me by a reader of this blog (thank you!), and I’ve been since to take a look at it from afar.

Joan, surprisingly I think, doesn’t often talk about individual species of plants, animals or birds in any detail. She loved deer, and thrilled every time she came across them in the New Forest. A few others get more than a single mention – Curlew; Fox; Oak and Beech, of course; Shelduck; Cuckoo – and among these is the Grey Heron. Joan is clearly impressed by this enigmatic bird.

So, I thought this week I would write of the Grey Heron and share tales of it with Joan.

The sketch map is reproduced from the last post, further annotated to show the heronry.

There’s a heronry a little west of the Avon at Bickton. Looking at it from where the footpath turns away from the bottom of Frog Lane, heading for Midgham Farm, you can see the scraggy twiggy tumbles of nests in the tall trees of a little unnamed copse that has been marked on maps for a century or more. The heronry is probably long-used; I’m told there are a few tens of nests there. Then turn back and walk eastwards, and you’ll see several herons, standing in their quiet way by the water channels and sluices that lie near the footpath to Bickton.

On a day of mixed sun and showers, damp in the air but warm on my skin, after gazing at the heronry, full of nests but no herons, I walked on and paused on a rickety footbridge overlooking the Bickton fish farm ponds (now closed). Joan, Bill and Mr Bundy walked near here, and I think of them possibly stopping at the same spot. No fish farm, whether working or closed, for them; they would have been pondering water meadows and channels associated with the Bickton Mill and Avon catchment. They would, though, have seen herons, I have no doubt. This is a heron place. As we look across the ponds, I count at least seven.

Herons can stand very, very still. Even now, when there’s more than one close by each other, there’s seemingly no communication between them, not that we humans can notice, in any case. No chatter, no squabbling, no gossip by the river. Patient, poised. With other creatures, I’ve been known to mistake a statue for the real thing. It’s the other way round with herons; a few times, I’ve seen a heron, in a garden or park, and thought it was a statue until it turned its head or took off on slow wings.

Herons can be noisy, of course. There’s a croaking fraank flight call, and a gentle gogogo alarm call, raucous clatter at the heronry, and mating displays of clapping beaks. But, here and now, they are all perfectly still.

A heron stands with its neck stretched out, those startlingly cold eyes staring downwards, ready to strike if prey comes near. On a misty morning in the marshes of Breamore or Bickton a heron is an otherworldly thing, appearing and disappearing with the curls of fog, motionless. Even when a heron walks on its long thin legs through the shallow waters, it’s a stealth walk, head and neck bent over its chest, ready to straighten and strike in a split second.

And when a heron sets sail in the sky – that flight! – it should be ungainly: the ponderous take-off and beating of wings, neck an S-shape over its back, legs trailing behind as if a fixing has come adrift. But it isn’t ungainly. Joan agrees.

…once – oh! memorable day – I surprised a great grey heron at his fishing. He was standing under the bank and did not see us coming until Bill came floundering down it into the water. Then he rose and flew majestically away, allowing me a good view of his black pigtail, long yellowish rapier-like beak, and his cold round eye.

That rapier-like beak is truly fearsome. If you ever see a Grey Heron catch a small fish, watch it throw the fish in the air and open its beak to swallow it headfirst; this is so the scales don’t catch on the heron’s throat. Larger fish are carried away from the water and beaten or stabbed to subdue them. Herons may also eat small mammals and water birds; these are held by the neck and drowned, or the heron may break their neck. Herons will later regurgitate any indigestible material. They are an apex predator of the waterway; the ancestral dinosaur isn’t far beneath the surface of their feathered skin.

As we sit watching the herons from our wooden footbridge, Joan tells me a disturbing little tale.

Herons, I was told by a local country man, are bad things to meddle with, and was given the following story as an illustration. One cold, foggy day a man returning from duck shooting heard a curious noise in the fog above his head. He was anxious to learn what the vocalist was and chanced both barrels at the place he judged the noise to be coming from. There was a cluttery rustle and down came tumbling the awkward body of a heron. The man ran up and stooped over it to pick it up, but like a flash the dying bird drove its beak into his face and the poor fellow went home without the heron and minus an eye.

I wouldn’t wish this calamity on any person (or, indeed, any heron), but I do remark that if the unfortunate man hadn’t been so quick to shoot at something – seemingly only out of mild curiosity at what was making a noise – then he would have kept his eye.

Grey Herons don’t get it all their own way. Other birds will mob them, to protect their nests and territory. Joan tells me about the time she saw a heron being mobbed by gulls.

On a sudden we heard a harsh protest from the clouds and looking up saw a long way off a flock of gulls mobbing a heron. The screaming and wailing of the gulls came faintly on the wind, and every now and then the heron sounded his angry note as he strove to out-distance them. The group made me think of an airship being attacked by hostile airplanes, so slow and laborious was the one, so nimble and swift were the others.

The scientific name for the Grey Heron is Ardea cinerea. Ardea is the Latin word for heron, and cinerea is Latin for ash-grey; our word cinders is derived from the same root. Perhaps the ash-grey reference is for the ash-grey of its back. There is, though, a Roman legend. Ardea was a town in Italy, capital of a tribe called the Rutuli. In a long-ago battle, so the tale goes, Ardea was razed to the ground, and from its ashes their arose a heron. So, Ardea came to be the Latin name for a heron, and the bird’s ashy grey feathers remember an ancient people.

Herons are themselves an ancient race. For how long have there been Grey Herons standing by our waters, or wading slowly through the shallows and into the skies on outstretched wings? They’ve been recorded since the Anglo-Saxons arrived, and fossils dating to the last glaciation have been discovered. To me, though, they seem older, always-present. In Irish myths, the heron is one of the guardians of the treasures of the Otherworld. Maybe, then, they have come from undying lands, visiting for as long as the waterways and marshes have been here. If we lose the wetlands, then we lose not just the herons, but a connection with part of our own ancient soul.

Here’s a list of online resources I used to find out about and be amazed by Grey Herons.

2 thoughts on “The Grey Herons of Bickton”