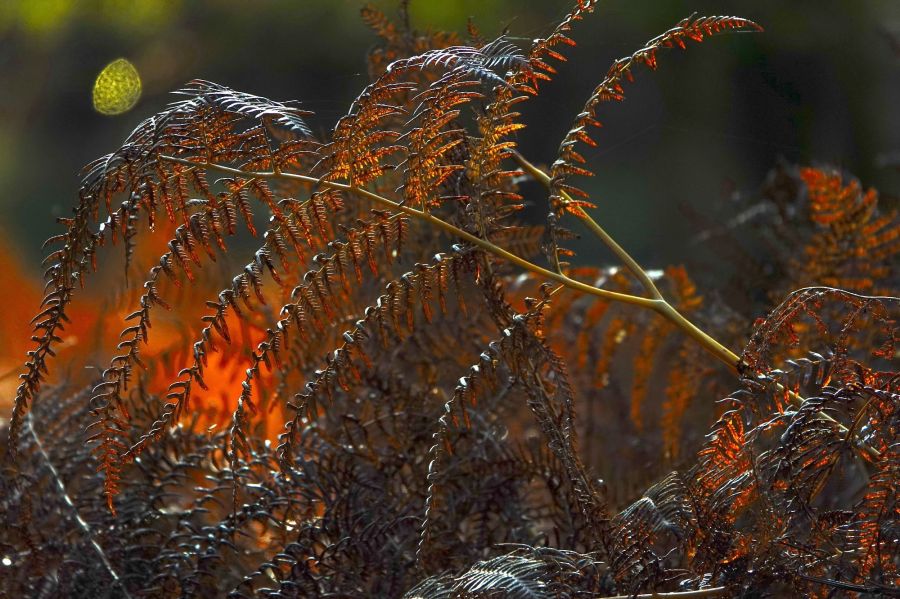 In which I walk through an ancient wood of the New Forest in the autumn, and think about getting lost

Mark Ash is one of the most famous woods in the Forest, and though we had been thrilled by the thought that today we were to see it we had not guessed what a wonderful meeting it was to be.

Regular readers of this blog will know that I am following in the bootsteps of Joan Begbie and her two dogs (Bill, a white bull terrier, and Mr Bundy, a diminutive griffon). Joan wrote about her walks in the New Forest in her 1934 book Walking in the New Forest, which is full of her entertaining observations, knowledge, and her own lovely little sketches.

I’ve written about Mark Ash Wood in the New Forest twice before. The first time was in August 2021, when I told how I got lost inside a bracken ‘forest’ in the part of Mark Ash that lies to the west of Bolderwood Arboretum Ornamental Drive. I wrote: “I didn’t mind getting lost in Mark Ash Wood. It is truly beautiful. I think I left a bit of my soul there, still exploring.”

That left-behind bit of my soul called me back only two weeks later, on an early autumn day of September 2021. That time I walked along the northern edge of the wood, and the bracken failed to confuse me, despite its best efforts. My woodland-entranced soul fragment stayed behind again, so that I would return, and return I did, in November this year. This time, it wasn’t a long walk in distance – just 2.5 miles – but with all the stopping to explore nooks and crannies, hidden footpaths, peering at fungi and moss, I was in the wood for four hours. I lost myself again, not geographically, and not in bracken, but in quiet wonder and communion with the trees of Mark Ash.

Mystery amid a great company of trees abides here…

Joan Begbie loved Mark Ash Wood. She was alive to its quirkiness and beauty. Recently, someone posted on Twitter a quote by Alice Walker, author of The Color Purple.

How much those words bring to mind the beeches of ancient Mark Ash. Here are some words from Joan herself.

Squat, distorted, and warty, they give one a feeling of watchfulness, as though witches and hobgoblins had for a moment taken on tree shapes to further their evil ends. Stand still when you meet such a group and you will learn that they speak to each other in a secret code of squeaks, groans and cracks, though no wind is aloft to help the branches send their messages.

I used that quote of Joan’s in one of the earlier posts mentioned above, and commented how thrilled she would have been to learn that we now know that trees do indeed nurture and talk to each other, both in chemical signals across the air and through, below the ground, the wood-wide web of mycorrhizal fungi. I wish she had still been alive to read about this research, but I do believe, from her own words and descriptions of the New Forest and its ancient woods, that she had a sense of it.

Mark Ash is ancient woodland, unenclosed, and the largest beech wood in the New Forest. The nearest car park is at Bolderwood, and the most direct route to Mark Ash is to walk a short way south along the Bolderwood Arboretum Ornamental Drive (though you can first walk along a footpath from the car park as far as Bolderwood Cottage). For this reason, you do not meet many people, if any, in the wood, even in summer: they are all mostly heading west towards Bolderwood Grounds, the deer sanctuary, and the cycle tracks beyond. In autumn – perhaps the most magical time in Mark Ash, with its golden colours, fungi and red holly berries; even the bronzed bracken is lovely – you are very unlikely to find other folk. It is solitary, but not lonely, a place to linger and watch and listen. It must be very much as Joan found it when she visited, Bill and Mr Bundy at her heels (or, in the case of Bill, dashing ahead and disappearing into the undergrowth in pursuit of woodland scents). Bill would have been very excited by the deer that I saw, hidden among tree shadows.

I took a path through the middle of the wood, to the east of the Ornamental Drive. My experience of Mark Ash, both this time and on previous visits, is that most of the footpaths marked on the map are hard to find and follow, probably due to low use (by humans, anyway). This is, of course, compounded in autumn, when any traces of paths are covered by fallen leaves. I used my OS phone app some of the time to follow where the path should be, but the lack of a visible track made exploring all the more fun. I found myself diverting whenever I saw something to investigate, a new way to go, or a glint of autumn sun through bare branches and bronzed leaves. I discovered a spreading beech tree completely covered in green moss, from the base of its trunk to the tips of its upper branches. It started to rain a little, so I sheltered beneath the beech for a while, feeling the soft moss under my fingers and the power of the tree against my body as I leaned into its solidity. I named it the Green Velvet Tree.

What else did I find? Bilberry, or whortleberry as Joan names it, readying itself for bursting into new life next spring; a bracket fungus crowned with golden beech leaves; and repeating patterns on the water of the brook I crossed over a little wooden bridge.

I lingered a while on the bridge, engrossed in the rippling water, floating leaves, and ferns. Joan wasn’t very clear in her description in Walking in the New Forest as to which way she walked through Mark Ash Wood. I wonder if she came this way with Bill and Mr Bundy, and stood gazing into the brook. It probably would not have been as peaceful, mind you, with Bill leaping in and out of the water, and Mr Bundy looking anxiously on.

From here, the path becomes clearer as it bends to meet the northwest corner of Wooson’s Hill Inclosure. I turned right down an even clearer track, which opens out into glades of trees and sunlight. A little way along, I met and chatted with someone who I remembered I’d met briefly before, in the library of the New Forest Heritage Centre, in Lyndhurst. He is very knowledgeable about the New Forest, and explained to me how to find where the ash trees would have grown (Mark Ash Wood is so named because, at its western edge, ash trees marked the old parish boundary). Ash trees, while not overly fussy, do tend to prefer more carbonate, clay soils, and my temporary guide pointed out on my map where the earth, on the other side of the Ornamental Drive, becomes loamy; there were old marl pits there, which he told me to look out for. My track crossed the Ornamental Drive, and I duly veered to the right. I passed an upended tree, its roots exposed, and I could clearly see the loamy soil, full of small stones, and it wasn’t long before I found the marl pits. The rights of commoners to dig marl (which they used to improve soil on their smallholdings, or for building) died out by the late nineteenth century (Colin R. Tubbs [1986] The New Forest, Collins, London; p. 100). The old pits are now scrubby, brambly depressions, shaded by the wood. I couldn’t find any ash trees, though I did find a thin but healthy one by the road on the way back to the car park. I love the sturdy black buds of our native ash (Fraxinus excelsior). Ash die-back disease breaks my heart.

Back at the car park, which was only a third full – very different from the summer overcrowding at this popular site near the deer sanctuary – I paused to look back over the woods. Joan and the dogs had walked to Mark Ash from further south in the Forest (one of their long hikes), so I imagined waving them farewell.

In places like Mark Ash, where an older breeze blows through the branches, and the memories of past wanderers, like Joan, linger beneath the mossy trees, I find a different way of getting lost. Not physical, though that, too. It’s more about an opening up of oneself to possibilities, different paths, being brave about uncertainty – it’s that old “road less-travelled” again, in both its literal and metaphorical guise. I’m currently studying a short literature course on writing and walking, and we’ve been reading A Field Guide to Getting Lost, by Rebecca Solnit. There’s a passage in there that I’ve underlined in my copy, and it explains it much better than I do.

The question then is how to get lost. Never to get lost is not to live, not to know how to get lost brings you to destruction, and somewhere in the terra incognita in between lies a life of discovery.

And so, I have not reclaimed that wandering piece of my questing soul from beneath the beeches of Mark Ash. I’m not ready to yet, and maybe never will be.

6 thoughts on “Mark Ash Wood in the autumn: a New Forest meander”